The photographs of proud Greek Jewish families in the early 1900s and the richly decorated artifacts from centuries past on display at the Holocaust Memorial and Tolerance Center of Nassau County reflect a vibrant community. But images from the 1940s, of sobbing people on their way to Nazi death camps and of postwar commemorations of the murdered, document a darker era.

“Portraits of Our Past: The Sephardic Communities of Greece and the Holocaust,” on view through Aug. 15, is an exhibition about a little-known sector of the Holocaust that Beth Lilach, senior director of education and community affairs, said she had long wanted to bring to the center. 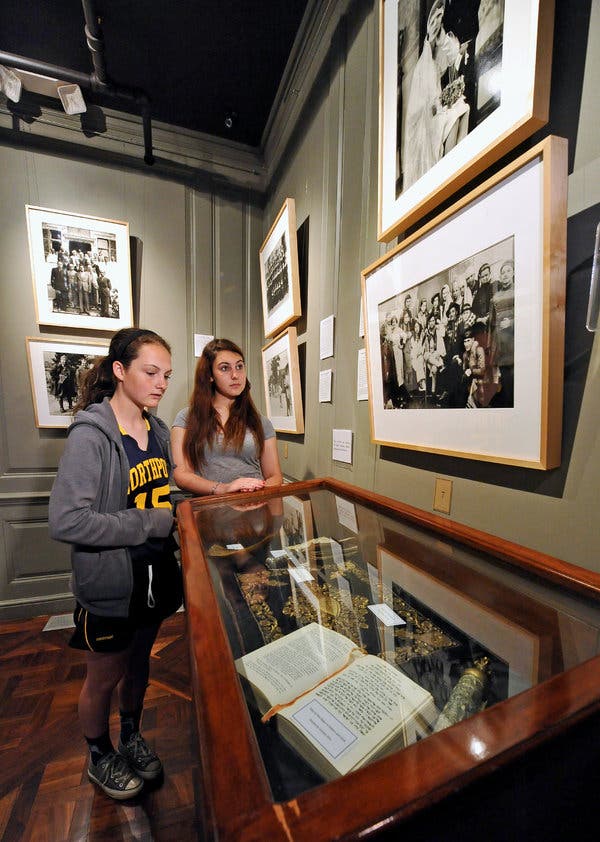 “When most people think of the Holocaust, they think about Germany, Poland, Auschwitz, the camps,” she said. In Greece, however, 87 percent of the Jewish population perished, she said. That represented about 67,000 people, a relatively small share of the six million Jews killed throughout Europe during the Holocaust.

The exhibition, Ms. Lilach said, emphasizes not only the Nazi horrors but also the long history of Jews in Greece and the large number of Greek Christians who risked their lives to save some of them. Many descendants of Greek Jews settled in Queens and Long Island, she added.

The central section of the exhibition is largely about the Sephardic Jews who came to Greece from Spain and Portugal in the 15th century and continued to speak Ladino, a language that is based on 15th-century Spanish and is written using Hebrew characters. Another section focuses on the Romaniote Jews, who arrived in Greece more than 2,000 years ago — the oldest Jewish community in Europe — and had different customs from the larger Sephardic population. Altogether, some 60 photographs and 14 artifacts are on display.

A prayer book (circa 1900) and a silver Torah pointer (1870s.)CreditKathy Kmonicek for The New York Times 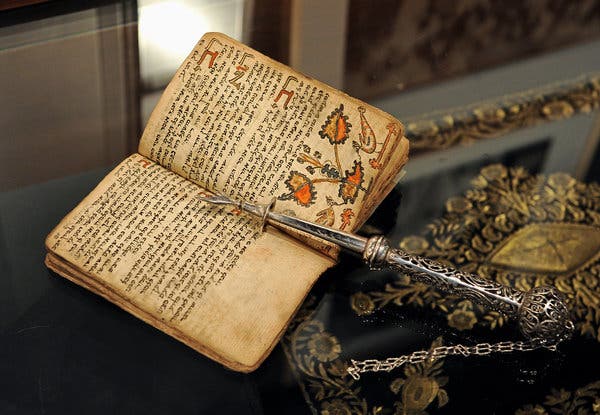 A third element in the show is “Greece and the Holocaust,” a DVD produced by the Holocaust center and shown on a monitor. It includes archival material, music and personal testimony by Beni Elias, who lived in Long Beach until his death in 2010, Ms. Lilach said. His cousin Martin Elias, who lives in Brookville, underwrote the exhibition.

On the DVD, Beni Elias spoke about his experiences in a concentration camp, where Jews not strong enough to work were taken immediately to a crematorium. He described the death of his brother, whose spine was broken by a Nazi guard. Defying the rules, Mr. Elias crept into the barracks where his brother lay dying and crawled into his bed. In the morning, he said, he did not see his brother: “My brother was dead.”

The DVD also tells the stories of several of the Greek gentiles who are counted among the “righteous” Christians who helped to save Jews; there are 315 of them in the Righteous Among the Nations database maintained by Yad Vashem, the Holocaust memorial in Jerusalem. Among them were the archbishop of Greece and the police chief of Athens, who together saved 560 Jews by claiming they were Christians and giving them false identification papers.

A circa 1890 jacket made in Greece, near portraits of Greek Jewish victims of the Nazis.CreditKathy Kmonicek for The New York Times

“Many courageous people did the right thing, and they should be acknowledged,” said Marcia Haddad Ikonomopoulos, museum director of Kehila Kedosha Janina Synagogue and Museum in Manhattan, which represents the Romaniote community and has lent artifacts and photographs to the exhibition. The artifacts include a pair of unusual platform shoes, with two heels on each shoe, that women wore to a ritual bath around 1870; two pillow covers and a jacket embroidered with real gold; a handmade illustrated prayer book from around 1900; and a silver container made in the 1850s to hold a scroll telling the biblical story of Esther.

The photographs include a particularly moving image of a young woman crying in anguish as she and others from her town of Ioannina are being deported on March 25, 1944, to Auschwitz-Birkenau. “That photograph just spoke volumes,” said Ms. Ikonomopoulos, who lives in Huntington. The museum put the photo on its Web site, she said, and the young woman was identified as Fani Haim by a member of her family, who said she was 15 or 16 at the time. Of 1,960 Jews deported from Ioannina, only 110 survived, and Ms. Haim was among them. She settled in Athens, had a family and died in 2008.

Another striking photo shows Gracia Samuel, also of Ioannina, in 1940, a diminutive girl with large dark eyes standing at attention for her formal portrait with a small smile on her face. “She was about 4 in the photo,” Ms. Ikonomopoulos said. “She was 8 when she perished in Auschwitz, along with her family.”

Leo Mallah, a concentration camp survivor, around 1946.CreditCourtesy of the Isaac Gershon and Family Foundation for the Advancement of Sephardic Studies and Culture 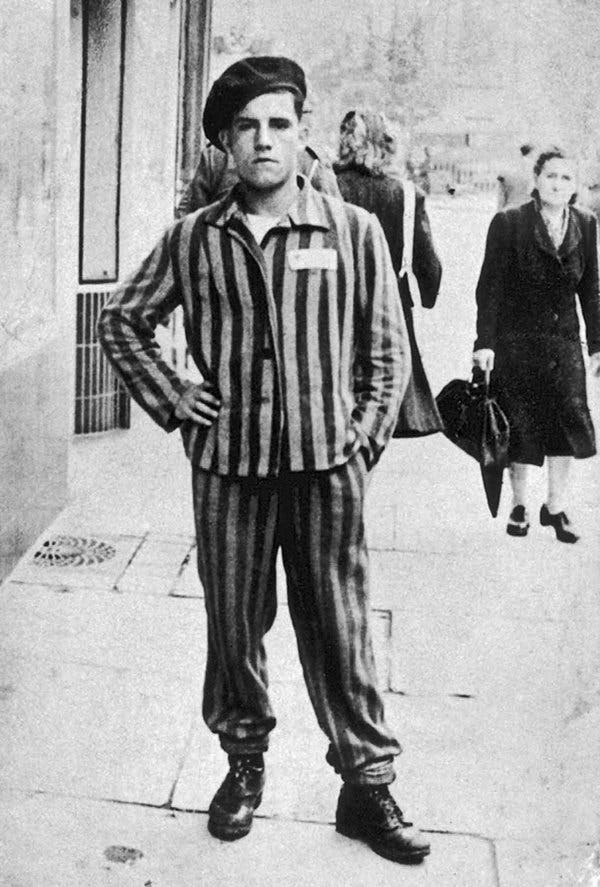 The core exhibition about Sephardic Jews is on loan from the Foundation for the Advancement of Sephardic Studies and Culture and was produced by Robert Bedford of Leonia, N.J., the foundation’s executive director; Stuart Fishelson of Brooklyn; and Dr. Joe Halio, a geriatrician who practices in Great Neck and lives in Manhasset.

Dr. Halio, the foundation’s president, said his mother’s father, Albert Torres, came to America from Salonika in 1911 and published newspapers in Ladino from then until 1948. His grandfather’s mother, whose portrait is in the exhibition, he said, had stayed in Greece and died during deportation. Many of the photographs, he said, were collected at a Sephardic synagogue in Forest Hills. There are also Sephardic congregations in Cedarhurst, he said, and in Brooklyn, where he grew up.

From the time of their arrival in Greece, the Sephardic Jews “struggled to remain an unassimilated minority, preserving their language, culture and heritage,” Mr. Bedford wrote in an exhibition-related booklet. The Romaniote community was more assimilated, at least in terms of clothing, as suggested in a portrait of two women wearing elaborately patterned dresses in the town of Chalcis, on the island of Euboea, in about 1910.

Photos from the 1940s show men being rounded up for forced labor and women carrying bundles of their possessions as they are being deported. A photo taken around 1946, a year after the liberation of Auschwitz, shows Leo Mallah, formerly of Salonika, posing grimly on a street in Germany. He still wears a striped camp uniform, perhaps his only clothing at the time.

An article in some editions last Sunday about an exhibition on Greek Jews at the Holocaust Memorial and Tolerance Center of Nassau County, in Glen Cove, N.Y., included an outdated number from the center for the “righteous” Greek gentiles who helped save Jews during the Holocaust. According to Yad Vashem, the Holocaust memorial in Jerusalem, the Righteous Among the Nations database includes 315 Greeks, not 307. The article also referred incorrectly to them. They were not all Greek Orthodox.